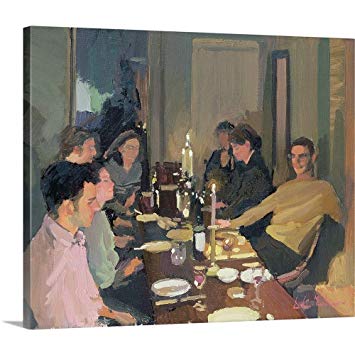 I do not eat meat and have not done so for thirty years.

I am not evangelical about it. Other people’s diets are their own affair. And whilst the damage to the planet through meat consumption is deeply disturbing, my own consumption of fish and seafood generally does not provide me with any moral high ground on that score.

But one recurring dinner party conversation I have had over the years with those who like to eat meat has always puzzled me. It goes like this:

Other : That just means red meat, or white meat too?

Other : But you eat fish?

Self : I love to eat fish. All seafood in fact. Except sea-living mammals.

Other : Some might consider fish to be meat. But anyway, you used to meat once upon a time?

Self : Yes. Lots of it. Anything with a pulse.

Other : So why did you stop?

At this point I explain that it was for a number of reasons, all and none of which are the primary reason – heath and family history, ethics, environment, animal welfare, etc.

Other : OK (nodding, and then a pause). But you still eat fish.

Other : You have to admit that is pretty arbitrary

Other : Well, eating fish and not eating meat. How do you make that distinction?

Self : Between warm-blooded and cold-blooded, I suppose.

Other : Ha! That is really arbitrary.

Self : (smiling) No more than your eating choices when it comes to living creatures.

Other : What do you mean?

Self : You eat cow, and pig, and sheep and chicken I suppose.

Other : Not so keen on rabbit, but its fine.

Other : (Looks askance) No

Other : People don’t eat those

Self : I am sure they do somewhere. What about dog, or cat, or squirrel, or rat, or elephant, or giraffe or lion or kangaroo or ostrich, whale or dolphin or …. monkey or ….

Other : Now you are being stupid.

Self : (Shrugs). You rather aggressively suggested my line on what living creatures I eat and do not eat is arbitrary, and I would be the first to concede it has failings from numerous points of view. Vegetarians and vegans would certainly raise questions. The bottom line is I that I don’t eat mammals. The truth is I personally don’t care what you eat, or why.
But when it comes to drawing arbitrary lines. I think you draw them a lot more untidily than I do.

Written a year ago. Though a regular conversation over time.

Posted by Romantic Dominant on May 10, 2020 in Still Life, Uncategorized