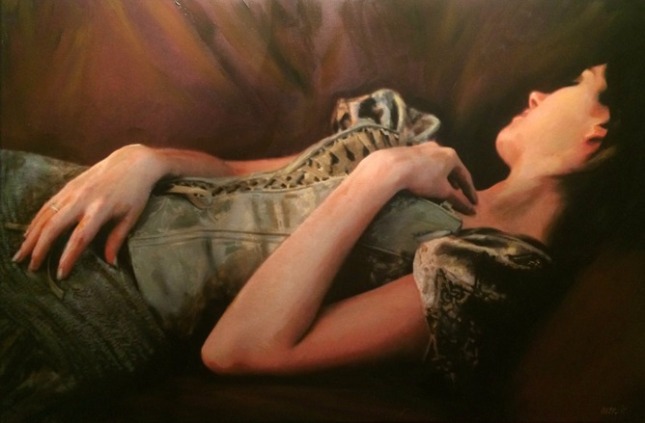 Her breathing is shallow. Her chest rises and falls. He counts the seconds and studies her for signs of waking.

He says her name. Softly.

Again. A little louder. But still quietly. He does not really want her to stir.

He gently takes her hand in his. It is small, and soft, and cool. Her fingers lie over his. They are quiet and still. His thumb and forefinger circle her wrist. He can feel her pulse. He imagines it quickening, but he cannot be sure. He lowers her hand to the bed.

She is beautiful. Her hair is raven black against her pale skin. Her lips are perfectly formed and ruby-red. She is wearing a pure white dress that is fitted at the breast, tight at the waist, and clinging to her hips. Sleeping Beauty

He knows he should kiss her, rouse her from her slumber, bring her back to consciousness.

But her still and perfect form has mesmerised him, captivated him, bewitched him. He feels himself harden as he moves towards her. He murmurs her name again. His throat stifles the sound.

He reaches out and with almost trembling fingers he strokes her cheek. Her skin is warm to his touch.

She does not stir.

He carefully undoes the first of the buttons. And then another. And a third. The gorgeous swell of her breasts makes him dizzy with desire.

At the sixth button, as the material begins to peel open, he realises she is naked underneath.

She is not sleeping.

She senses him standing by the narrow bed, gazing at her. She knows his eyes are upon her, taking in every curve, and every line. She waits. And tries to control her breathing.

She focuses on keeping perfectly still.

She hears him say her name. Twice. She ignores it, forbidding her eyelids to flicker.

He picks up her hand. His sudden touch in the darkness almost makes her flinch with surprise. His fingers are long and thin. She fears he will feel her pulse race crazily as his thumb presses against her flesh. He releases her gently, and she knows.

She is certain about what is going to happen when she hears her name a third time, and it is said like a faint prayer in a hoarse and caressing whisper.

His touch upon her cheek is like fire. She almost gasps at her own arousal.

He begins to undo the buttons of her dress.

She will not wake now.

This is not new, I wrote it some time ago. But I like it, it has proved popular (sometimes controversial)  – and so I hope you can forgive it’s regular July outing.

This site uses Akismet to reduce spam. Learn how your comment data is processed.